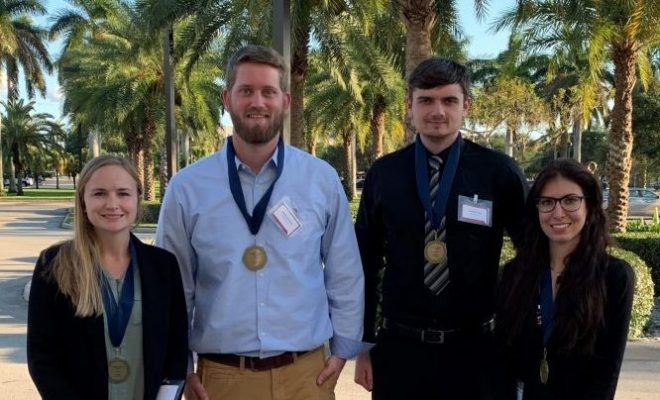 Held April 22 at Florida Atlantic University in Boca Raton, the event brought together senior projects from the engineering colleges at 10 Florida universities.

The project won the People’s Choice Award, which along with the Judges Award is given to the top university teams.

“Nixus” is easy to put on and can be worn continuously. It uses nickel-titanium actuators and nylon bands, which “compress sequentially from the ankle to knee to facilitate lymphatic drainage. Pressure sensors are placed between the device and the patient’s leg to ensure therapeutic and safe pressures,” according to the project description.

The Design Invitational at FAU was developed by engineering deans from the Florida universities to showcase the collective strength of engineering and computer science programs in the Sunshine State and the impact these institutions have in providing thousands of skilled engineering and technology graduates entering the innovation economy.

“From Jacksonville to Miami, to the Space Coast and the High Tech Corridor, Florida’s universities are educating and preparing thousands of engineering and computer science students for jobs in the Sunshine State – the nation’s fastest-growing economy – and beyond,” event organizers said.

Florida Tech sent two additional projects to the Design Invitational in Boca Raton. They were: