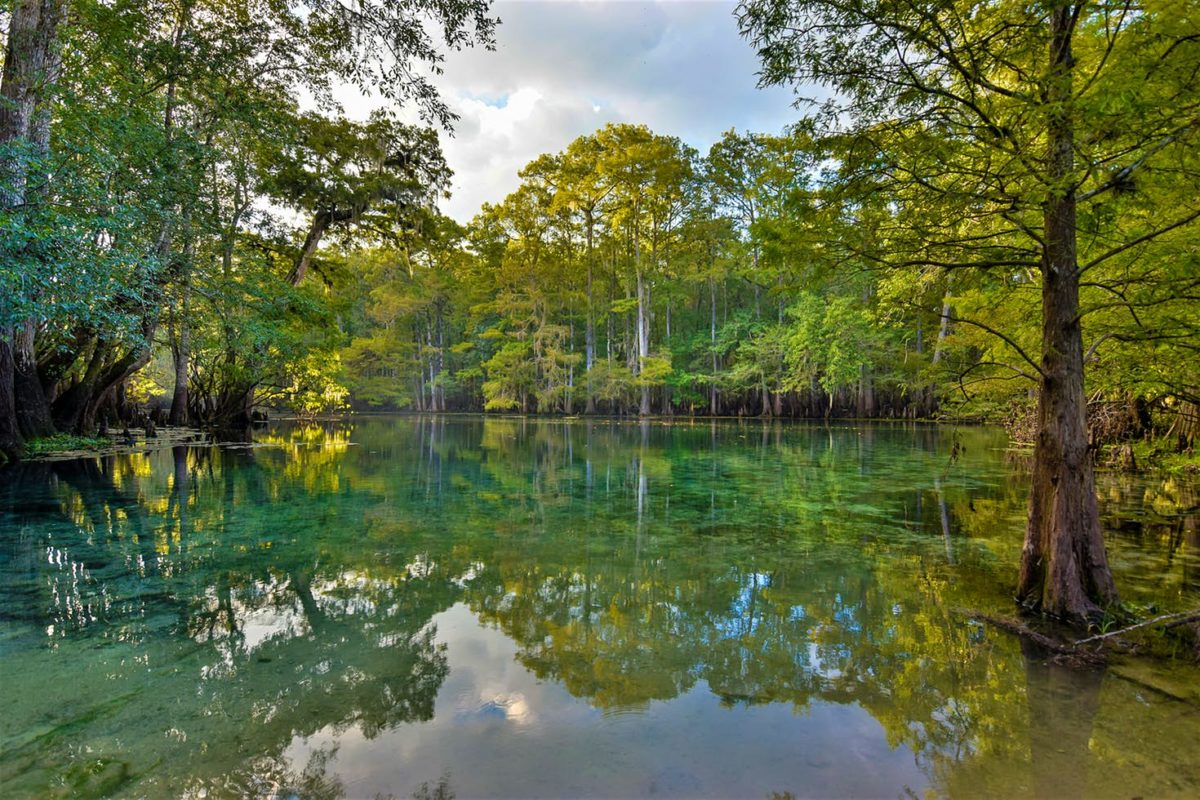 Florida’s tourism identity is intimately tied to water, and for most visitors, that water either means the Atlantic Ocean or the Gulf of Mexico. Fair enough – Florida is a peninsula, after all, and if anything defines the state’s geography, it’s the fact that the state is surrounded by water on three sides. But flat Florida is also cut through with green rivers and dotted with crystal blue springs. The interior, freshwater waterways of the Sunshine State have the potential for as much adventure as her exterior oceans.

Down upon the Suwannee River

The Suwannee River is primarily known to most folks as the subject of ‘Old Folks At Home’, the Florida state song, now sung in a revised version that eschews the plantation minstrelsy in the original version. But what you should know the Suwannee for is its excellent paddling opportunities. This is a true Southern blackwater river; the dark color derives from the tannins dissolving off of the vegetation that forms a corridor around the waterway. A great point of access is, unsurprisingly, Suwannee River State Park.

And man, what vegetation. Cypress trees, live oaks, and groves of pine web across limestone outcroppings. Vines trail in the water and birds flap overhead. If you’re curious to learn about the folkways of the people who live near the river, which runs through Northwest Florida, make sure to stop by the Stephen Foster State Folk Cultural Center. You’ll learn plenty about the Big Bend region – the area where the Florida Panhandle begins to curve into the state’s north-south peninsula.

Blue Spring is popular with humans, sure, but it’s also notably a big draw for Florida manatees, who flock to these consistently 72-degree waters come winter. When the manatees depart around March, you can go swimming at Blue Spring State Park again.

In a state with no shortage of excellent places to stick your head in the water, Blue Spring is a clutch swimming hole. The water has a consistent temperature, and if you’re into casual water recreation like tubing, there are plenty of concessionaires around to help you get started. Said concessionaires can also hook you up with a canoe, kayak or boat tour. A paddle into the St John’s River watershed, which Blue Spring is part of, is not to be missed.

Head into the water from a launch at Silver Springs State Park, in Marion County in North Central Florida, and the experience might not feel vastly removed from other Florida inland waterways. Jungle-like vegetation hems in on either side, as your boat paddles over remarkably clear waters. Most noticeable: a proliferation of wildlife anywhere in Florida (certainly a rarity at any state park). Among the animals you may spot are eagles, herons, foxes, alligators, and otters. There are even a few rhesus monkeys living in the park. All this, and you’re only a quick drive from college-town Gainesville.

The ‘Glades, also known as ‘the River of Grass’, are the home of a vast, waterlogged prairie and acres of hardwood swamps. All that makes for perfect paddling adventures near the southern end of the state. There are several places to launch from, but we find Hell’s Creek, a narrow corridor of vegetation and tannin-heavy black water, to be one of the most evocative. While you’re paddling down this narrow waterway, you can camp on raised platforms with thached roofs called ‘chickees’. Other paddling adventures in the Everglades include boat trips around the area’s primeval hardwood and cypress swamps.

Oddly enough, in the middle of Florida’s most iconic city, one can find a paddling trail that takes a deep dive into South Florida’s ecosystems. Oleta State Park is barely minutes from some of Miami Beach’s glistening high rise condo canyons, yet it feels a world – and an era – utterly removed from all of that modernity. This is the largest urban park in the state of Florida, and a local outdoor center can get you hooked up with the equipment and gear you need to take to the water.

This fantastically named blue freshwater spring is best known as the home of a band of resident performing ‘mermaids’, but Weeki Wachee is also one of the better paddling springs in Florida. Located in Hernando County about an hour north of Tampa, Weeki Wachee Springs State Park encompasses the eponymous springs, where the flow of water is so powerful it replaces itself every 60 minutes or so. The crystalline water is an attraction in and of itself, but so are the human ‘mermaids’ and manatees that Spanish explorers mistook for mermaids. This is a popular destination, so expect crowds, especially on weekends.