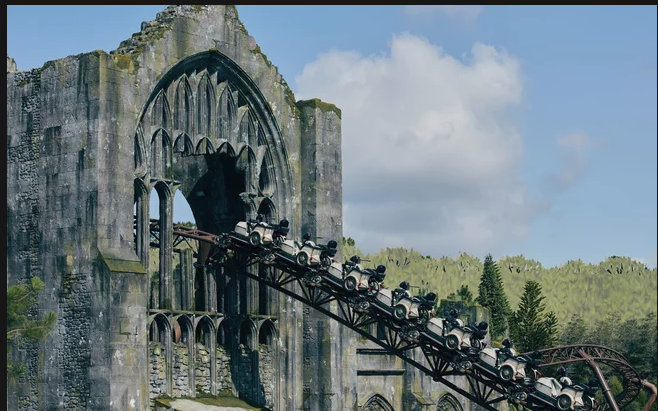 As the longest roller coaster in Florida, Hagrid’s Magical Creatures Motorbike Adventure is a record-setting revelation that’s shattering expectations. Between its record-breaking number of launches — a jaw-dropping seven — and an unexpected surprise encounter with devil’s snare, rest assured, you’ve never had this much fun at Universal Orlando Resort before.

Wondering what those launches do, exactly? The second your motorbike or attached sidecar — a brilliant seat design offering two different ride experiences — would begin to plateau, it’s instead propelled forward, giving Orlando’s newest and possibly best coaster a constant energetic boost that brings the thrills. Those seven continual launches, the most of any coaster in the world, keep momentum going for a journey that never lets up and a sensation as unbelievable as the magic-packed “Harry Potter” films themselves.

You can ride a “broomstick” past Hogwarts’ Whomping Willow and take a rusted-out mine train through Gringotts’ bank vaults on attractions elsewhere in Universal’s Wizarding World of Harry Potter, but only here, speeding past Hagrid’s hut and overcoming otherworldly encounters does the ride technology actually feel as mystifying as an Apparition spell.

The attraction itself takes place as a fictional Care of Magical Creatures class, where guests shuffle into enchanted motorbikes (thanks to a charm by Rubeus Hagrid and Mr. Weasley, Ron’s dad) to see the fabled Blast-Ended Skrewt. Choose between a motorbike littered with knobs and switches for a real-life experience out of “Harry Potter and the Sorcerer’s Stone’s” opening moments or an attached oblong sidecar — both offer different perspectives — and hold on tight for a speedy trip through the Forbidden Forest packed with over a thousand trees and the inventive creatures from J.K. Rowling’s best-selling novels.

You’ll zoom past a centaur, come face-to-face with that gigantic scorpion-like Skrewt and even see his three-headed dog Fluffy — but not for long enough to need music to subdue him. From Cornish pixies floating above the Weasley family’s Flying Ford Anglia to getting stuck in Devil’s Snare to a Unicorn duo, it’s a stand-out attraction worth buying tickets for. (For an added scare, give it a go at nighttime, when the only light comes from each motorbike’s headlight, making for a realistically wild time.)

For a ride that moves this quickly — Hagrid’s Magical Creatures Motorbike Adventure hits speeds up to 50 mph — you expect it to end fast, too, but it doesn’t. The nearly mile-long track, the longest in the state, carries passengers through all ends of the forest and back before a shocking ending that’s worth the lengthy wait in line. And speaking of that line — even in its first few weeks, wait times have become so long that the ride has reached capacity before day’s end. Be sure to utilize the Virtual Queue (or call ahead to check the wait) and try your best to board earlier in the day before Florida’s regular rain storms hit, when the ride has to close for thunderstorm safety and does, regularly.

Universal Orlando Resort refers to Hagrid’s as a “story coaster,” and though it’s categorically for families, encourage your littles to channel that Gryffindor bravery as this wild ride sacrifices none of the fun adults are in search of on a thrill-packed vacation. (Its height requirement is 48”, or four feet.) This new Hogsmeade roller coaster perfectly bridges the gap between child rides and aggressive thrill-seeking: it’s supremely fast but without inversions and has familiarity in its most frightening moments and is unprecedentedly smooth, making it approachable for all theme park guests and a brilliant addition to the park’s other Harry Potter experiences.