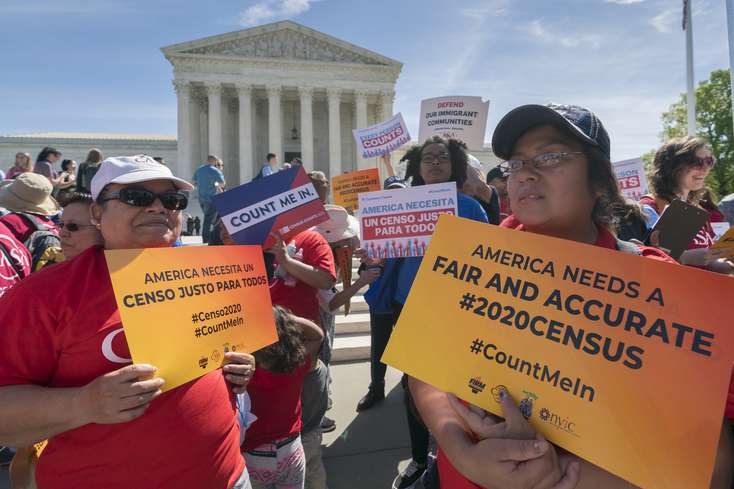 The U.S. Supreme Court stopped, for now, an effort by the Trump administration to put a citizenship question on the 2020 U.S. Census, returning the case to a lower court and requiring officials to provide a better explanation for why it’s needed.

It’s a significant blow to U.S. Department of Commerce officials who sought to add the question. The U.S. Census Bureau was planning to print forms as early as next week, and it’s not clear if there will be time to argue for the question in court beforehand.

Had the court approved the question, forms would have asked every resident in every household whether they are a U.S. citizen, a move expected to lead to undercounts of immigrants and Hispanics. It would have been the first time it was asked on such a scale since 1950.

The question, approved by Secretary of Commerce Wilbur Ross, was expected (by outside researchers and the bureau itself) to dissuade a sizable portion of the country, especially noncitizens, immigrants and Hispanic people overall, to respond to the Census.

If people refuse to respond to the census forms received in the mail or online, the Census follows up to try to count them anyway. Census takers will knock on doors, ask neighbors and look up other government records. But groups with lower initial response rates risk a chance of never being counted at all.

Florida is still expected to fall prey to a high undercount – projected to be either the 7th or 8th highest among states. Black and Hispanic residents, of which Florida has high populations, are more likely to be missed in general. In addition, one in every 11 Florida residents is not a citizen. (Noncitizens include both undocumented immigrants and those here legally).

For states, Census counts matter for determining apportionment of congressional representatives. But at every level of government, they’re used to determine where to build schools or hospitals, allocate budgets and award grants.

Despite the undercount risk, this state has taken an active role in pushing for the citizenship question. Florida Attorney General Ashley Moody signed an amicus brief supporting the question. Of the 17 states to sign on, only Texas has a higher noncitizen population.

Supporters argue that the question is necessary to count the citizen, voting-age population. Knowing that figure, currently determined through survey data, is important for identifying majority-minority districts in accordance with the Voting Rights Act.

But critics suspect asking the question stems from interest in state redistricting based on citizen population, which would in many states give more electoral clout to heavily-white areas. A report found on the old computer of a late Republican operative in Texas outlined how doing so would help the GOP.

Thursday’s Court’s opinion was that the primary justification for adding the question “seems to have been contrived.”

Republicans in Florida have gone so far as to say even congressional representation should rely on each state’s number of citizens, rather than all its residents. Doing so would go against a U.S. Constitution clause that requires counting “the whole number of persons in each State” for reapportionment. (That has always meant total population, except for when it excluded Native Americans and counted three-fifths of the enslaved population.)

Another Florida connection: James Uthmeier, a top attorney for Gov. Ron DeSantis, was in the thick of the process. Uthmeier, who used to work as an adviser and counsel for the Commerce Department under Ross, gave testimony in mid-June to the U.S. House Oversight and Reform Committee but refused to answer many of the questions about his role.

Uthmeier told the committee he consulted a “long-term mentor,” the law professor and The Federalist Society contributor John Baker. Baker has argued for using the citizenship question to limit congressional apportionment only to citizen population.

“Political representation for aliens in the elections for the House of Representatives conflicts with the ‘one-person, one-vote’ principle,” Baker wrote in 2018.