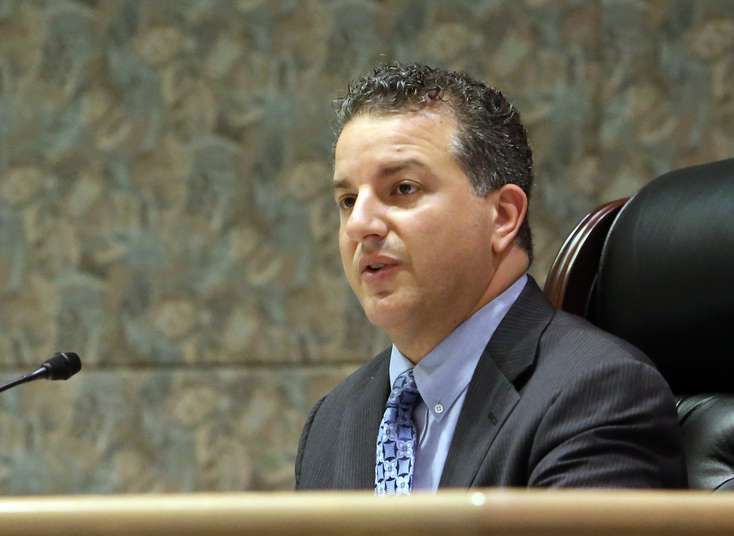 Florida Chief Financial Officer Jimmy Patronis should be investigated for breaking state law after he posted a woman’s sexual harassment complaint within hours of it being filed, according to a request by the woman’s lawyer.

Attorney Tiffany Cruz is representing a woman who lodged a complaint against the state’s banking regulator, Ronald Rubin, on May 10. Patronis, in an apparent attempt to pressure Rubin to resign, issued a news release announcing Rubin’s suspension that included a link to the woman’s redacted complaint.

Florida law seems clear: Employee complaints are “confidential and exempt” until they’ve been investigated. That warning was at the very top of the woman’s complaint form that Patronis released.

It’s a first-degree misdemeanor to knowingly and willingly violate the confidentiality statute.

THE BUZZ: ‘Pay to play — or else:’ Florida’s banking regulator alleges CFO corruption

“My client made her written complaint with every expectation that the complaint would be made confidential,” Cruz wrote. “Unfortunately, Chief Financial Officer, Jimmy Patronis and [spokeswoman] Katie Strickland, failed to adhere to the requirement of the statute and released a poorly redacted copy of the complaint to the media within a few hours of receiving it.”

Moody’s office responded to Cruz Tuesday by saying it wasn’t something their office could investigate. Moody’s general counsel instead referred her complaint to the Office of Financial Regulation’s inspector general.

If the inspector general finds a crime was committed, Moody’s general counsel wrote, then it would be referred to the Florida Department of Law Enforcement, not the Attorney General.

Cruz said Tuesday that the release was “absolutely not” proper and that some people have been able to identify her client because of its release.

“Very clearly in the statute, it is not proper,” she said.

She said her client has “absolutely” been harmed, and that it’s possible she’s been used as a pawn in a dispute between two high-ranking Florida officials.

“The timing of the release, certainly, lends credibility to that argument, I think,” she said.

Strickland didn’t respond to a request for comment about Cruz’s assertion. Responding to questions last week, Strickland wrote that the decision to release the complaint was vetted by the department’s lawyers.

“All released documents were reviewed and redacted by legal counsel.” Strickland wrote.

Cruz is now the second person to request an investigation into Patronis for posting the harassment complaint. The first was Rubin’s own lawyer, who also asked Moody to investigate, citing the same state law.

Rubin, in a lawsuit filed last month, alleged that Patronis intentionally released the woman’s harassment complaint to pressure him to resign.

The woman wrote that she had to hide from Rubin at work after he twice invited her to check out renovations to his downtown Tallahassee condominium and invited her to stay at his apartment in Washington, D.C.

Rubin has called the incidents a misunderstanding.

As the commissioner of the Office of Financial Regulation, Rubin oversees the regulation of banks, payday loan shops and check-cashing stores.

He’s alleged a “pay-for-play” system within Patronis office, blaming the CFO for trying to oust him after he wouldn’t hire someone that Patronis’ chief of staff wanted him to hire.

Rubin, a former enforcement attorney at the U.S. Securities and Exchange Commission, had not had a full-time job in four years, and one media report said he’d been fired from his last job over an accusation of sexual harassment.

A maximum penalty for releasing a confidential employee complaint would be a year in jail and up to a $1,000 fine. Cases where someone is charged, however, are rare.

One of the few examples is from last year, when Okaloosa County School District spokesman Henry Kelley was charged after releasing a complaint against a school employee to a television reporter.

Kelley was charged with a noncriminal infraction and paid a $500 fine.

Kelley’s lawyer, Nathan Clark, said what Kelley did was an accident. Kelley was merely fulfilling a request for public records from a reporter, and if he’d waited a few more days, he would have been allowed to release the record without penalty.

Patronis’ case looks much different. Florida law makes it a first-degree misdemeanor for anyone who “knowingly and willingly” releases an exempt record.

Releasing the complaint the same day it was filed, combined with the fact that it appears Patronis released it without anyone requesting it, could be reason enough to open an investigation, Clark said.

“I think it’s easy to say there’s probable cause to investigate that,” Clark said. “A case can be made that he knowingly released this.”

Clark called the release of the harassment complaint “highly improper.”

Patronis was a restaurant owner and former state representative from Panama City before former Gov. Rick Scott named him to replace former chief financial officer Jeff Atwater as one of three people on Florida’s Cabinet. He was elected to the job last year.

The dustup over Rubin is largely one of Patronis’ own creation.

Last year, Patronis pressured the previous commissioner of the Office of Financial Regulation, Drew Breakspear, to resign over vague “concerns over the lack of cooperation, responsiveness, and communication.”

Patronis then advocated for Rubin to replace him of 21 other candidates who met minimum qualifications. Rubin was picked by Patronis and the Cabinet in February and hired at a salary of $166,000. He remains on paid leave.