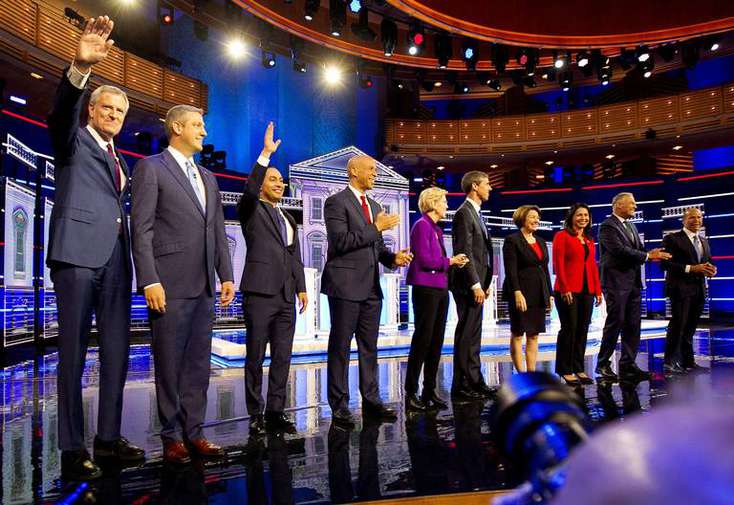 Florida’s week hosting the Democratic debates and the party’s menagerie of candidates is over. Miami is in the rearview mirror. The contenders are back to stumping in Iowa’s 99 counties and holding court in New Hampshire living rooms, where the attention is likely to stay for much of the rest of the year.

Democrats leave behind a tremendous vacuum in the country’s most important swing state. Except for fundraising stops and a few small events, none of the campaigns have invested much time and energy in Florida and they don’t have plans to anytime soon. But while the candidates eat meat on a stick at county fairs and court New England newspaper endorsements, President Donald Trump is ramping up a well-funded, digitally savvy re-election machine in Florida and other 2020 battlegrounds.

Trump has already demonstrated his base is ready, holding a campaign kickoff in Orlando two weeks ago that drew roughly 20,000 to the Amway Center. And because he never left the campaign trail and has not changed his message, he is already well versed in the art of energizing supporters. Even as an incumbent he is framing the election as the next battle between Washington and the little guy.

There are concerns in Democratic quarters that they lack a counter punch to Trump’s messaging. The Florida Democratic Party responded to Trump’s rally with a protest a few blocks away. They planned to fly a Trump baby balloon over downtown Orlando, but in a twist of fate that could stand in as a metaphor, thunderstorms grounded the inflatable.

n an op-ed meant to raise the alarm, Ben LaBolt, one of the architects of President Barack Obama’s re-election campaign, warned that Trump is “running unopposed” in critical states like Florida. The two dozen Democratic candidates are understandably concentrated on the early nominating contests. Their operations are too meager to look ahead to Florida’s primary, which isn’t until March 17, let alone the general election.

The party and its allies need to pump money into blunting Trump’s message on the airwaves and through digital advertising now, LaBolt said. If not, “the Trump campaign will define the general election on its own terms, before we can even choose our nominee.”

Florida’s Democratic Party, though, isn’t in position to take on that effort alone. Party leaders are reckoning with years of mismanagement and narrow losses, and are still mastering the basics of party building: registering voters and recruiting candidates. The party hopes to add 200,000 Democrats to the voter rolls by the primary, part of former gubernatorial nominee Andrew Gillum’s strategy for 1 million new voters in 2020.

(After the story published, state Democratic Party executive director Juan Peñalosa on Twitted said that in addition to registering voters, the party has more than 100 paid organizers, it is training volunteers and plans for monthly five-figure ad buys “slamming Trump.” In a statement, party chairwoman Terrie Rizzo called it, “the largest pre-presidential election organizing effort in years, and we are ready to defeat Donald Trump in the Sunshine State for our Democratic nominee whomever she or he may be.”)

Veteran Democratic strategist Eric Jotkoff said those efforts will pay off and any money spent now on ads “you might as well light it on fire.” Jotkoff is less troubled by Trump’s frequent visits to Florida, he said, because his speeches are divisive rallying cries for his base that won’t recruit new Floridians to his side. Polls show Trump is more popular in Florida than in many other swing states but also that most Democrats would give him a difficult re-election fight.

“The more time Trump spends down here, the better it is for Democrats,” Jotkoff said. “He’s his own worst enemy.”