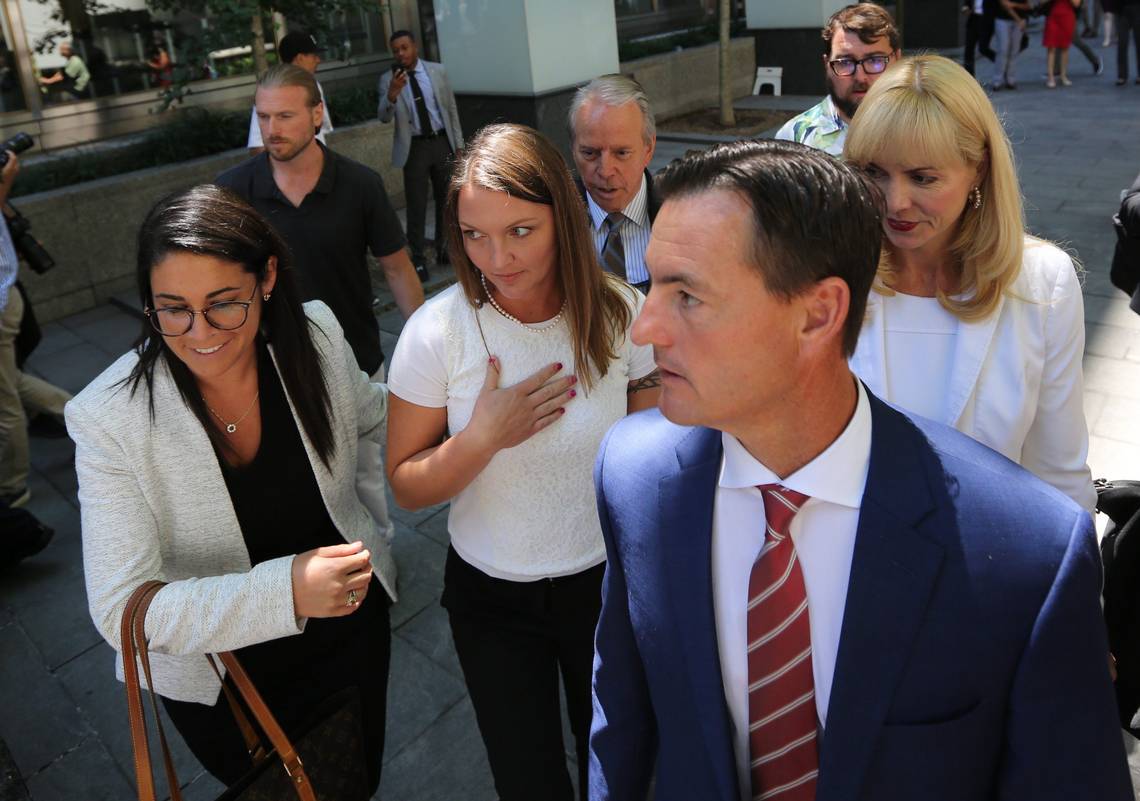 Two women who say they were molested by Jeffrey Epstein as teenagers stepped forward at his bail hearing in New York federal court on Monday, telling the judge that releasing the accused sex trafficker on bail would pose a threat to them and to other women who were abused by him.

Facing Epstein in court for the first time, Courtney Wild and Annie Farmer stood about four feet from the defense table, where Epstein, dressed in a dark blue prison jumpsuit and orange sneakers, appeared stunned, shaking his head at one point during their emotional plea to Senior U.S. District Court Judge Richard Berman.

“He is a scary person, he should not be walking the streets,’’ said Wild, 31, who was groomed by Epstein, starting when she was 14, to perform sex acts on him and others and also directed to lure other underage girls to his waterfront mansion in Palm Beach.

Berman, who said he would issue his ruling at 9 a.m. Thursday, invited the accusers to speak, something they were deprived of doing by federal and state prosecutors during Epstein’s 2008 sentencing on prostitution charges in Florida.

U.S. attorneys for the Southern District of New York are asking that Epstein be held in custody, contending that the multimillionaire money manager has the financial means to flee, is a danger to the community and has a history of coercing and threatening victims, witnesses and their families.

Epstein attorney Martin Weinberg, however, argued that there is no proof that Epstein was behind the aggressive tactics used by private investigators in Florida 11 years ago who followed Epstein’s victims and, at one point, drove so aggressively that a parent was forced off the road.

Weinberg added that his client had “disciplined himself’’ and has led a law-abiding life in the 14 years since his arrest in Florida.

Berman, who has authored a number of articles about child abuse, was not convinced, pointing out that studies show pedophiles and sex offenders often return to their established ways after as long as 15 years, and in fact, the rate of recidivism grows as time passes.

“These crimes are the most difficult to evaluate,’’ Berman said, “because in sex crimes victims very rarely come forward.’’

In another twist, Assistant U.S. Attorney Alex Rossmiller announced that FBI agents, in addition to finding nude and semi-nude photographs of possible minors in Epstein’s home safe, also discovered a pile of cash, dozens of diamonds and an expired passport bearing Epstein’s photograph but an alias. The passport, issued from a foreign country, listed Epstein as a resident of Saudi Arabia, Rossmiller said.

“Frankly there is a lot of material we are still working through,’’ Rossmiller said of the evidence found in a raid last week at Epstein’s Manhattan mansion.

The prosecutor added that in the week since Epstein was arrested at Teterboro Airport in New Jersey, additional witnesses and victims have spoken to prosecutors. Rossmiller said the federal sex trafficking case against Epstein is expanding by the day.

Epstein, 66, faces up to 45 years in prison if convicted. His arrest followed the Miami Herald’s publication of a series, Perversion of Justice, that detailed a lenient plea agreement granted in 2008 by federal and state prosecutors in Florida and for the first time offered detailed first-person accounts from Epstein’s accusers, the Palm Beach police chief and the lead detective who handled the case.

The New York charges ignited a political firestorm, and led to the resignation Friday of U.S. Labor Secretary Alexander Acosta, who was the U.S. attorney in South Florida when Epstein’s plea deal was negotiated.