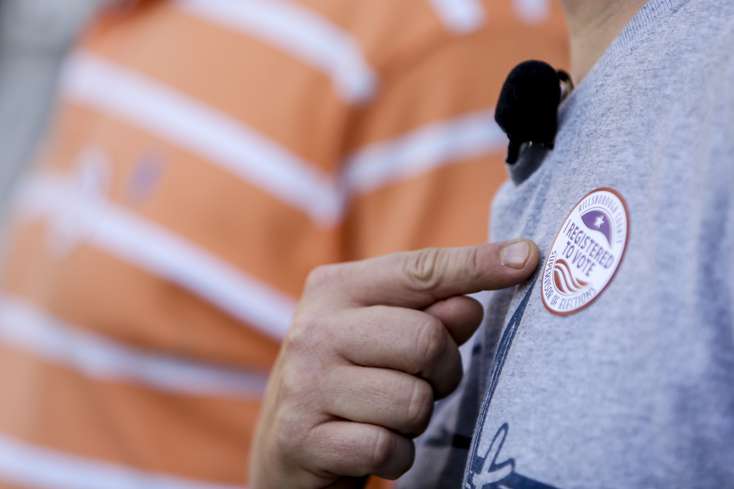 Steven Phalen lives in Bradenton, has a Ph.D. in communications, and is a felon who owes about $110,000 in court costs and restitution.

In his home state of Wisconsin, where he was sentenced, he is eligible to vote.

But in Florida? He isn’t, after Gov. Ron DeSantis signed the Legislature’s bill Friday evening restricting how many felons would be eligible to vote under Amendment 4, a ballot measure that passed last year.

Phalen is one of more than a dozen felons who sued state and county officials over the weekend, alleging that they registered to vote after the historic amendment passed last year, but DeSantis’ action will likely kick them off the voter rolls.

“The state was like, ‘Welcome back,’” Phalen said Monday. “And now they’re like, ‘Hold on a minute.’ Which, frankly, is infuriating and troubling.”

Amendment 4’s fate is now in the courts, where judges will decide whether Florida’s Republican-dominated Legislature was right to require all felons pay back court costs and restitution before being eligible to vote.

The judge hearing the case is U.S. District Judge Mark Walker, a Tallahassee judge who has become quite familiar with felon voting.

Last year, he tossed out the previous method for felons to restore their right to vote, calling the system under former Gov. Rick Scott a “scheme,” and the state’s defense of it “nonsensical.”

The American Civil Liberties Union is representing most of the plaintiffs, which include the Florida State Conference of the NAACP, the Orange County branch of the NAACP and the League of Women Voters. A hearing has not yet been scheduled in the cases.

Critics have called the Legislature’s bill a “poll tax” and a remnant of the racist 150-year-old law overturned when two-thirds of voters passed Amendment 4, which sought to restore voting rights for non-violent felons. Most states, such as Wisconsin, do not require felons pay back all court fines, fees and restitution before being able to vote.

Previously, felons had to go before a clemency board led by the governor that met only a few times a year.

Amendment 4 restored the right to vote to most felons who completed “all terms of their sentence including parole or probation.”

What “all terms of sentence” meant was up for interpretation, though. A lawyer for one of the groups that pushed for the amendment told the Florida Supreme Court it included fines, fees and restitution, but there was no mention of those requirements in the amendment.

During this year’s session, GOP lawmakers could have taken up a plan that gave relief to felons. The Senate was poised to pass a version of the bill that would have waived fees and fines if they were converted to a civil lien, which often happens.

Instead, lawmakers chose to take the more restrictive approach.

The 13 plaintiffs highlight the various ways that the Legislature made it harder — or impossible — for felons to vote.

One Hillsborough County man, Kelvin Jones, 46, is disabled and cannot work, for example. He can’t afford to pay the $52,000 in fines and fees from his drug trafficking conviction.

The Legislature allowed for a felon to petition a judge to have those dollars converted into community service hours. Already, some prosecutors, such as Hillsborough State Attorney Andrew Warren, are hoping to create a “rocket docket” to quickly get those cases heard.

But because Jones is disabled, he can’t perform community service, according to his lawyer, Michael Steinberg of Tampa.

“There’s a large group of people who are disabled,” Steinberg said. “They are physically and mentally unable to do community service or pay court costs.”

That includes Phalen, who was convicted of arson and reckless endangerment in Wisconsin. He’s paid down more than $40,000 of his $150,000 in restitution and fees so far, but acknowledges he’ll probably die in debt.

“I just feel like Sisyphus pushing this rock up this hill,” Phalen said.

THE BUZZ: She owes $59 million. Should she be allowed to vote under Amendment 4?

That means plaintiff Karen Leicht, 62, will likely never be able to vote under the current law. The Miami paralegal owes $59 million in restitution for various federal insurance fraud charges.

To pay off their debts, many felons pay a little bit down each month.

But the Legislature’s bill does not allow felons to vote while they’re paying it down.

Bonnie Raysor, 58, served 18 months in prison on drug-related charges, and she was released in 2011. The Boynton Beach woman now works as an office manager, according to her lawsuit, and she still owes $4,260 in court fines and fees.

She pays $30 each month, according to the lawsuit, so she might be eligible to vote in 12 years.

Many of the people who are suing are already voters, having registered during the six months between January, when Amendment 4 took effect, and Monday, when the Legislature’s bill took effect.

But now, many are expecting to get a notice in the mail notifying them they’re no longer eligible. No one seems to know when such notices will go out.

Betty Riddle, 61, is one of the people who expects to get a notice. After decades of drug-related convictions, the great-grandmother from Sarasota got a degree from State College of Florida at age 52 and now works as a communications assistant in the public defender’s office in Sarasota County.

“For 11 years, I’ve lived a productive life,” said Riddle, who also has eight great-grandchildren. “I got a job, I went to college, I bought a car, bought a house, I’m paying taxes.”

She and her family celebrated when Amendment 4 was passed, and she successfully registered to vote. But recently, she said she contacted the courts in Sarasota and Hillsborough and discovered she has at least $2,000 in court fees and fines still unpaid.

Riddle, who is part of the ACLU’s lawsuit, now considers herself a voice for other felons trying to restore their civil rights.

Just how many felons are affected by the law is unclear. The Florida Rights Restoration Coalition, which led the Amendment 4 effort, estimated that hundreds of thousands of the estimated 1.4 million felons in Florida will be shut out of voting.

News of the lawsuits gained national attention, but neither the coalition nor its leader, Desmond Meade, is involved with it.

They declined to weigh in on the validity of it the lawsuit, instead touting that Amendment 4 is still “the largest expansion of democracy in 50 years,” Meade said in a statement.